Arts and Crafts and Village History - Collection in the "Old Brickworks

Since its reconstruction in 2005, visitors can expect to find the only brickworks with a completely preserved ring-fired kiln in the region. The local history room has been housed in the "Old Brickworks" since 2013. On all three levels, experiences and historical backgrounds are described that bear witness to the use of the brickworks building.

Exhibits, documents and photos on the history of the village, village life with its associations, mining and the local craftsman, the woodcarver Karl Gierscher, have been collected in the local history room. A special experience for visitors is the exhibition of geological finds from the surrounding open-cast mines.

As members of the Brickworks Railway Association guide you through the property, you gain insight into the production processes characterised by heavy manual labour and are let into the secret of why the building survived the difficult period after production ceased.

The "Klein Kölziger Ziegeleibahn e.V." association began rebuilding the former light railway in 2008. It was embedded in the grounds of the brickworks. The history of the light railway in Klein Kölzig is vividly shown to the general public through the operation of the railway lines with historic vehicles.

In April or May, the season opens with the light railway and the open day at the brickworks.

In May and June, on the weekend after Ascension Day, there is a joint event with the Bad Muskau Forest Railway and the Muskau Arch Geopark Association. Also in May or June, visitors experience the Geopark Weekend in the Geopark by bike and train.

1. arts and crafts and village history

Exhibits, documents and photos on the history of the village, on village life and its associations, on mining, on the Klein Kölziger brickworks and on the local craftsman (woodcarver Karl Gierscher) have been collected in the local history room.

The offer takes place indoors and is aimed at pupils in grades 1 to 10.
Dates: by arrangement
Pre-registration: 2 weeks before at the latest

2. on the tracks of Lusatian bricks and light railways

The tradition of brick firing in Klein Kölzig goes back far into the 19th century. After the first small private brickworks had been established since 1840, the public limited company Großer Kurfürst Berlin built a brickworks in Klein Kölzig in 1892/94, the centrepiece of which was a ring kiln with 18 firing chambers. In 1920, a light railway was put into operation for the transport of clay, which had a length of 4.5 km. Visitors can expect to see the only brickworks with a completely preserved ring kiln in the region. During the guided tour of the object, insights are given into the production processes marked by heavy manual labour and, among other things, the secret is revealed as to why the building survived the difficult period after production ceased. Finally, there is a ride on the light railway on the circular route.

The programme takes place indoors and outdoors and is aimed at students in grades 4 to 12.
Dates: Monday to Sunday by arrangement
Pre-registration: 1 week before at the latest
Duration: approx. 1.5 hours
Group size: 10 to 25 people
Admission per person: € 3.50
Group prices on individual request
Ride on the brickyard railway:
per child: € 1.50, per adult: € 3.00 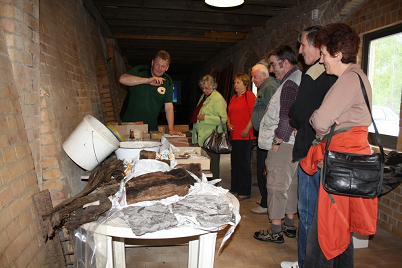 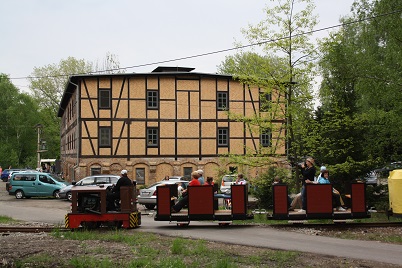 Opening hours
Guided tours and visits are possible by appointment.

Admission
free, donation for the work of the Heimatstube requested