One of the oldest houses in Döbern can be found at Ringstraße 53. Built around 1800, the first Döbern inn, the "Gasthaus Krätsch", was located here. In 1877, school was held here for a short time until the first school building was completed in today's Schulstraße.
In 1984, the building was bought by the town of Döbern, which initially established the town library here. In 1993, a small local history room was established. After the book stalls were relocated to Muskauer Straße 14, renovation and refurnishing took place. The Döbern museum of local history was opened on 30 May 2014. More than 100 m² of exhibition space invite you to visit.

The local history museum houses testimonies to the local history of Döbern and Eichweg. The main focus is on the history of the building, trade and commerce, school and local history and a small farm kitchen. Display and photo panels on the present-day district of Eichwege, which was called Dubraucke until 1937, show that there is a much older history than that of the former village of Döbern. In another room, the club life of Döbern and Dubraucke 100 years ago is depicted. The exhibition outside includes a well with a swing pump and a miner's workshop. In the outbuilding, a laundry and summer kitchen and a glassmaker's and grinder's workshop invite visitors to look around.

Every year, a series of lectures takes place in which interesting facts about the history of the village are conveyed. Articles on history can also be read in the "Döbern Kultur- und Heimatblatt". A special exhibition on scales and weights was opened in June 2016.
Special exhibitions are held 1-3 times a year on specific municipal occasions and highlights (anniversary of the kindergarten, waterworks, fire brigade, Catholic Church, development of the suburban settlement). They are realised on the principle of mobile display boards and are mainly produced by the association.

Evidence of the local history of Döbern

The "Heimatmuseum Döbern" is located in the building and on the grounds of the historic "Alte Schänke". It houses evidence of the local history of Döbern. The main focus is on glass production, the history of mining as a district history and the domestic economy of the rural proletarian population by means of changing exhibition areas.

The offer takes place indoors and is aimed at pupils in grades 1 to 10.
Dates: by arrangement
Pre-registration: 2 weeks before at the latest 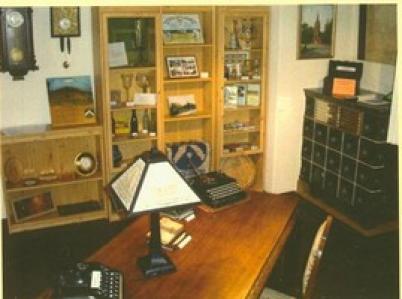