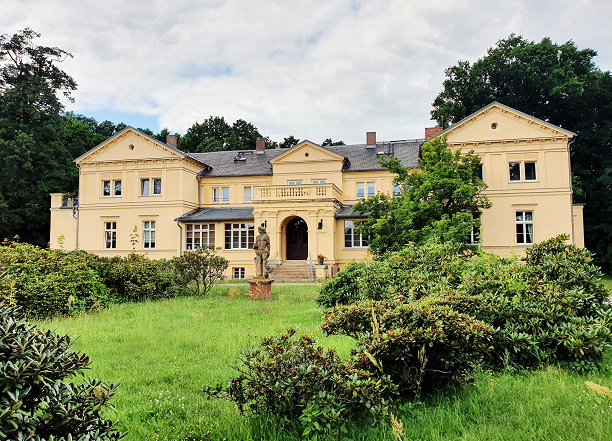 Hornow Castle essentially took on its present form in 1862, when it was converted into the stately home of the Wilkins family. The representative design of the ground plan as well as the exterior façade indicate that it was built in the era of late baroque or early classicism. Changes in ownership and new stylistic influences were accompanied by structural alterations to the building. The tower, for example, was completely demolished after it was damaged by a tree during a storm. The castle was declared a monument as early as 1982, and in 1998 it was officially added to the list of monuments in the state of Brandenburg as a "manor house with park and hereditary burial ground".

The Hornow estate was first mentioned in a document around 1436 and changed hands several times, including Prince Pückler, until it passed to the Wilkins family. The Wilkins family had a manor house built on the estate in 1862. The then Spremberg district administrator and church patron Dr. jur. Erwin Wilkins came into possession of a coal mine and a colony in western Usambara, among other things, with which he converted the manor house into a castle in 1903 and considerably expanded the park. In 1944, a department of the Swedish Embassy was moved from Berlin to Hornow, and a year later it was occupied by Soviet soldiers. After the end of the war, the Wilkins family was expropriated. Subsequently, displaced persons were housed in the castle in 1946 until a hospital ward and a kindergarten were established two years later. Between 1997 and 2009, the interior and exterior of the castle were renovated and today it is a meeting place for cultural exchange. The history of the building and the castle park will be shown in an exhibition from September 2022. The castle itself will also be the "exhibition object" with its unique ceiling painting by Max Rabes, the oriental painter of his time, its special parquet floors, some of which have been preserved in their original state, the original window darkening option in the so-called Empire Hall and many more highlights.

Opening hours
Thursdays from 16:00 - 18:00
(during the opening hours of the open bookcase) and
to all public events or
by telephone agreement